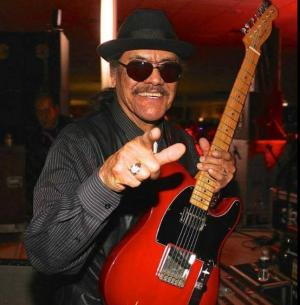 Augustín Ramírez is the adopted son of Austin, Texas. Born in Lockhart, Texas, 30 miles south of the Live Music Capital of the World, El Guti spent many of his early musical years on 6th and 11th Street, he cut his teeth in the music business sitting in on guitar for numerous rock n roll and blues groups in Austin's Music scene.

After his stint with Roy, Augustín founded his own group and recorded his first LP, "Ojitos Traviesos." El Indio* has recorded over 80 albums on many different labels, including El Zarape (Dallas), Freddie (Corpus Christi), Joey (San Antonio), and Capitol Records (Los Angeles, California). Capitol came calling in the 90s after a talent scout for the label discovered Augustín's work. Capitol Records bought Augustín's contract from Joey, the label he was signed to at the time, and the rest is history.

After his time at Capitol ran its course, Augustín decided to go independent and has been releasing his own music ever since. This move allowed for more creative control and thus the "Augustín Ramírez, The Legendary Volume" series began. The most recent release of this series is Old School Volume 8.

Augustín was inducted into the Tejano Music Hall of Fame in 1997. El Guti earned his first Grammy Award in 2000 for Best Tejano Album for "The Legends." The album was a collaboration between Orquesta Tejana greats Sunny Ozuna, Freddie Martínez, Carlos Guzman, and Augustín.

El Guti's musical mastery also extends to the bass, keyboard, and accordion, but he has also tried his hand at the trumpet.

Spread the Word about Rancho Alegre

Scroll to the top